Those who had the theory Manchester City’s name was being used to pressure Manchester United to hurry up and sign Bruno Fernandes for a big fee, may now believe similar is happening with Tottenham Hotspur.

The London club were brought into the story over the past week, having been linked earlier this year. A couple of days ago, A Bola had a headline highlighting Spurs interest, but in the actual article it was much more about the Old Trafford side.

Further claims have since been made about Tottenham, and Friday’s edition of the same newspaper says their offer is €68m. Manchester United’s is put at €70m plus a potential further €10m in bonus payments.

Sporting therefore prefer the higher offer, and it’s stated that even if Spurs return to try and beat United, which seems unlikely at the figures given, then a further counter-attack will be made. 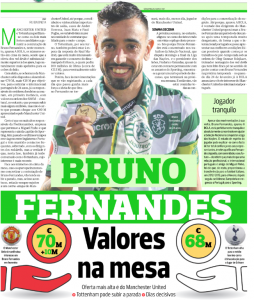 Miguel Pinho, the player’s agent has been travelling between Portugal and England trying to push a deal forward, and it’s stated the Manchester club have been pushing their interest since February… something A Bola points out they mentioned at the time.

Everything has to wait until after the Nations League, which ends on Sunday, and it’s explained Manchester United would give Bruno a good rest period before requiring him to join up for preseason training.

The question remains that if Ole Gunnar Solskjaer’s side are offering so much… why don’t Sporting simply accept it?