Still searching for a new centre-back in January, Milan haven’t given up on Eric Bailly.

They had moved onto other targets because Manchester United weren’t all that interested in a loan, but Gazzetta dello Sport believe that has now changed.

The newspaper explain that ‘after the initial closures’, the Red Devils ‘have decided to open the loan’ of the Ivory Coast international, who is currently with his national team at the Africa Cup of Nations.

Bailly ‘remains top of the list of potential Rossoneri reinforcements’, in front of Paris Saint-Germain’s Abdou Diallo, and the Serie A side are ‘waiting and expecting to close for one of the two’ before the end of the transfer window, with the Old Trafford man their preference. 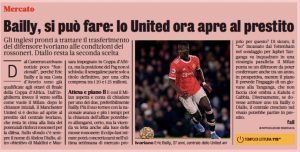 The arrival of a more experienced player, like that of the former Villarreal man, could also allow Matteo Gabbia to leave on loan for the second half of the season, as he doesn’t appear to be fully ready for regular football at the San Siro just yet.

We’ll have to see what comes of all this, but it certainly appears that Ralf Rangnick and his staff have decided that they can do without Bailly for the foreseeable future, and sending him somewhere where he can play regularly and hopefully improve his transfer market stock could be best for all parties in the long run.