There’s been some rumours this summer that Manchester United’s transfer plan has been to complete one signing before moving on to the next.

That’s almost certainly misleading, but it would be no surprise if the Premier League club have had several files open, with nearly everything in place for a deal, before spending a few days solely concentrating on getting each over the line.

Daniel James was sorted in the first week of June and then announced on the 12th, and then followed Aaron Wan-Bissaka, who had posed in the Manchester United shirt days before it was announced on June 29th.

Now for the next man.

Bruno Fernandes has been the subject of endless claims from both the Portuguese and English media in recent months. On Saturday there was nothing from Portugal, not even a vague claim of talks. 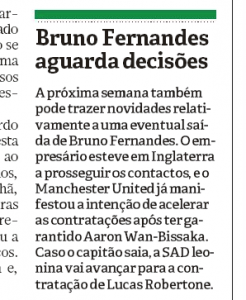 Sunday is similar, with just a small, yet potentially key, claim in Record.

They state the English club have now ‘expressed their intention to accelerate’ the Sporting midfielder’s transfer, having got the Wan-Bissaka deal done.

Miguel Pinho, Bruno’s agent, has been in England, and Record state there could be news on Bruno’s departure next week.

No other potential destinations are mentioned.