Manchester United have ‘no intention’ of signing Antoine Griezmann, at least at this time, report Marca.

The Premier League club were very strongly linked with Griezmann during the last summer window, a story the player was repeatedly happy to encourage. Any deal was killed by Atletico Madrid’s transfer ban not being reduced on appeal, and Griezmann got himself a pay rise and a deal which saw his buyout clause go back to €100m after initially doubling.

Marca say Jose Mourinho likes Griezmann as a player but was never fully convinced on signing the Frenchman, with the Spanish newspaper stating that differed from Manchester United’s stance as a club.

Seeing the commercial benefits of signing Griezmann, the Premier League club somewhat disagreed with their own manager, at least according to these claims.

Marca go on to say: ‘In recent weeks there has been talk of the possible interest of 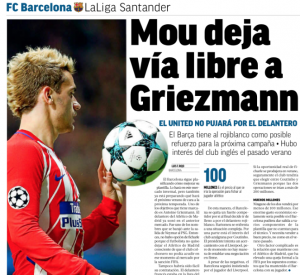 United in signing him and entering a bid next summer, or even in the winter if there was any chance of him leaving. However, at this time the English club has no intention of signing the player.’

This all means Barcelona don’t have to go up against Manchester United, and would have a clearer run at getting Griezmann themselves.