The Ivan Perisic saga is close to coming to an end, one way or another.

This is how Gazzetta dello Sport view the situation on Monday as they look at the forward’s odds of joining Manchester United in the coming days, as Inter Milan prepare to jet off to China to continue their preseason tour.

As you well know, Perisic left the group over the weekend in order to return to Croatia to deal with a tooth abscess, which was genuine and not just ‘toothache’.

The Italian newspaper explain the player’s dentist has sent all the relevant paperwork to Inter’s doctor, with the Manchester United target now expected to rejoin his teammates at training on Tuesday morning ahead of their trip east.

If the Red Devils don’t manage to agree terms with the Serie A side prior to this, however, this could mean the end of the saga, as Gazzetta explain José Mourinho will either convince Ed Woodward to pay up or he will find the answer to this complex situation by inserting someone else into his squad.

Were that to be the case, there is no doubt Perisic will be as professional as ever and get on with things and play in the next friendly, but that’s obviously not what the player, who agreed his personal terms with Manchester United a long time ago, would prefer. 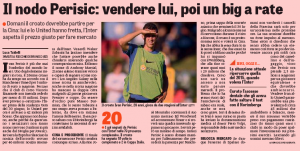 Unless Perisic is allowed to stay behind, much like Chelsea did with Nemanja Matic and Diego Costa, the general feeling here is the moment he steps on that plane, that’s pretty much the end of it.

And considering how much Luciano Spalletti wants Perisic to be a part of his team next season, the odds of him not travelling are pretty slim.

The only way for all of this to end positively for Manchester United and the forward is if something quickly happens in the, wait for it, ‘next few hours’.

For the first time this summer, that timeframe seems believable.