Record report that the midfielder can leave the Portuguese club in the winter transfer window having fallen out of favour under manager Bruno Lage.

The 20-year-old has managed just two starts in the league this season and has not even made the squad in their last three league games.

He wants to be a regular, and is now looking to move in January in search of more minutes.

Record report that Manchester United, Lyon and Milan are all interested in his signature, although Fernandes’ agents are in England at present.

Fernandes recently swapped from Portuguese agent Miguel Pinho to Pini Zahavi to ‘give a new direction’ to his career according to A Bola.

They have ‘held a number of meetings’ in recent days to look at ‘scenarios’, although it is not stated that they met with Manchester United specifically.

Indeed, Record make it clear that there are no formal offers on the table at present, but Benfica are willing to look at a loan or a permanent deal. 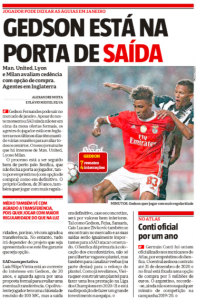 Fernandes has a €100m release clause, but the club accept they will have to accept a deal that is ‘much lower’ than that. They would also allow a loan deal with a purchase option.

As stated, the player is open to a move, but it is ‘all going to depend on the project’, meaning if Manchester United are keen, they will have to sell a move to the midfielder first.