Given Sporting are playing Benfica in the Supertaca tonight, most Portuguese newspapers are only highlighting the match, with a few talking about Bruno Fernandes’ possible departure in the next few days.

But there’s only one with strong new claims, and that’s A Bola. They report that Manchester United are preparing a big bid for the Lions’ captain, and want the transfer closed as soon as possible.

The outlet write that the Red Devils are ‘moving in to kill’. They should present a bid tomorrow, and the offer shouldn’t give a big chance for the competitors or even for Sporting to turn it down.

Since Manchester United and the  Lions have been in touch since February, this offer is said to be then product of them earlier given their word that they were interested. That’s what gave the Portuguese club some margin to reject Tottenham’s bids last week. 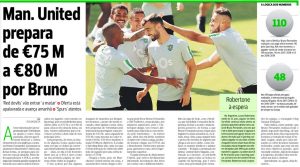 It’s said that on Monday, Manchester United want to ‘arrive, see and win’ the race for the midfielder. They’re ready to offer over €70m just to beat Spurs, who were told that this amount would be enough to take Fernandes.

The Red Devils are aware of Sporting’s wish to have Fernandes in tonight’s game. But after that, A Bola says the club want things done as soon as possible, with the player flying to England on Monday, or ‘as a limit’, on Tuesday, to complete the process.

Fernandes is said to be a ‘priority’ for Ole Gunnar Solskjaer, and A Bola says ‘everything indicates’ that he’s having his farewell match for Sporting tonight.