Plagued with injuries since the start of the season, Manchester United have played the last few games having to rely on youth and veterans alike to try and grind together some performances.

That hasn’t quite happened, as shown by their lacklustre outing against Newcastle United that ended in a 1-0 defeat to Steve Bruce’s men, but even the current situation has seen Ole Gunnar Solskjaer reluctant to use Nemanja Matić.

The Serbian, who was brought to Old Trafford by the José Mourinho regime, has started just four games from a possible 11 this season, the last of which came in the 0-0 draw to AZ Alkmaar in the Europa League.

This lack of time on the pitch has made him a prime target for some January transfer rumours, and Inter in Italy could be open to welcoming the 31-year-old if Corriere dello Sport are to be believed.

In their Monday edition, the newspaper continue their narrative from earlier this month where they reckon Antonio Conte could ask for one midfield recruit in the next window.

Things are going well enough in Milan, so no huge overhauls will be needed, but if a ‘low-cost’ option presents itself, it would be looked at. 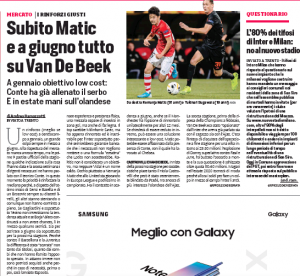 That’s what Matić, for whom Manchester United paid £40m, is these days, as his contract at Old Trafford is due to expire in the summer, even if the Premier League side have the option to extend it by a year if they so wish.

Corriere say that ‘if he asks to be sold in January, he could be an interesting and low-cost option’, ending by musing the Serbian ‘could be won over by the presence of Conte’, with whom he has worked previously at Chelsea.

This could be one of the recurring stories of the next couple of months, so brace yourselves.

After links to Leeds’ Bielsa, club’s ‘great signing’ in summer will...

Wolves’ Raul Jimenez says he’s ‘open to everything’ regarding future –...