Marouane Fellaini’s contract at Manchester United runs down this summer and the midfielder has so far not signed an extension with the Red Devils.

Two reports from Belgium today edge the player closer to AC Milan, with one giving the move an 80% chance of happening.

The 30-year-old is attracting interest from several clubs from Europe and China. Paris Saint-Germain, Marseille, Monaco, Besiktas and several Chinese clubs have shown interest in signing the former Everton star in the past few months, reports the Belgian newspaper Het Belang van Limburg.

HBVL says Milan are in pole position to sign Fellaini on a free transfer this summer. The Serie A outfit are ready to hand the Belgium international a three-year deal to make the switch to the San Siro.

Jose Mourinho is a big fan of Fellaini, even though there has been a difference of opinions regarding the player amongst the Old Trafford faithful. The Portuguese tactician is keen on retaining the midfielder and has already informed the board to hand him a new deal. 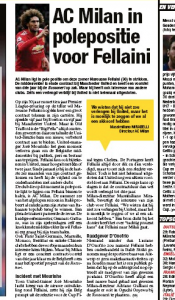 Fellaini is aware that it will be the last big contract of his career and is looking for a better deal. The 20-time English champions are ready to hand him a one or a two-year deal. However, the player is looking more at three years.

A failure to reach an agreement between the two parties would come as an advantage for Milan. They have reportedly been interested in bringing Fellaini to Italy at various points over the past few years.

Quotes from a club director about Milan being keen have made a bigger splash in Belgium and England than in Italy, with it being a common thing there for transfer ideas to be spoken of publicly and then nothing actually happen.

HBVL claims there is a “concrete contract proposal” for three years from Milan for the tall midfielder, which is what DH had exclusively revealed a few days ago. In addition to this, the Italian outfit’s sporting project has also appealed to Fellaini.

Today DH report the player ‘is in no hurry’, and whilst it’d be nice to settle his future before the World Cup, it’s not essential.

They claim Fellaini now has an ‘80% chance of signing’ for Milan according to their sources, and add ‘We are talking about very advanced discussions and some details that still need to be negotiated’.

Over in Italy, there’s been several reports voicing a concern over Fellaini asking for €10m a year in wages, and that could be what the ‘details’ are that DH mention.