Sevilla have identified Manchester United’s Anthony Martial as a transfer target in the winter market, according to AS.

The La Liga side will see both Youssef En-Nesyri and Munir El Haddadi join the Morocco squad for the Africa Cup of Nations. This, coupled with injuries to Erik Lamela and Suso, will force them to bring in a new attacker in January.

Martial, meanwhile, has struggled to enjoy regular game time at Old Trafford this season and he’s already ‘expressed to United his desire’ to go out on loan next month.

Indeed, the forward is keen to leave the Red Devils and his addition to the Spanish club’s squad will help them bolster the attack, especially knowing that he can operate either on the left or up front.

However, the France international’s wages are a ‘main stumbling block’ for Sevilla as his salary can make the deal ‘more expensive’, even if it is just until the end of the season. 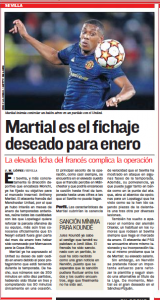 The La Liga side ‘cannot reach’ these figures.

The details of his salary are not mentioned in the report, but it is discussed by today’s edition of Mundo Deportivo, who say the ex-AS Monaco man has decided to leave United and join Sevilla.

Julen Lopetegui’s side have ‘made arrangements’ with both United and the player’s agent. However, the ‘big problem’ is his high salary. Martial earns €8m net per year, which is ‘absolutely unaffordable’ for the Spanish club.

Sevilla will only be able to take the Frenchman on a loan deal, if United were to pay part of his salary. He has proposals from Juventus and Barcelona, but the forward has informed his teammates he ‘prefers Sevilla’. 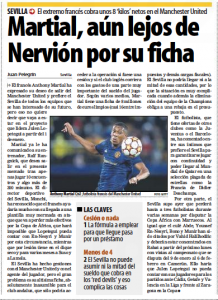 The Serie A side’s interest in Martial is is reported by TuttoMercatoWeb journalist Enzo Bucchioni. Juve will find it difficult to conclude the operation because the 26-year-old has ‘reached an agreement in principle’ with Sevilla and ‘will move to Spain’.

Despite Bucchioni’s claims, Sevilla, as per AS and Mundo, are finding it difficult to afford Martial’s current salary.