Manchester United and Real Madrid have ‘shown the most interest’ in signing Villarreal star Pau Torres.

The defender’s next two fixtures will be against his two suitors, Los Blancos [in the league] and the Red Devils in the Europa League final.

A victory over Real Madrid on Saturday is needed for the Yellow Submarine to retain a hope of qualifying for the Champions League via a top four finish. They can also make it to Europe’s top club competition by defeating Manchester United next week.

Achieving these two are the centre-back’s main objectives to end the season, reports AS on Friday.

The report then details the steps taken by the Madrid club and Ole Gunnar Solskjaer’s side to sign the Spain international.

It’s claimed Real Madrid have held direct talks with Villarreal to find out about the player’s situation.

Manchester United, on the other hand, have made it ‘very clear’ to Torres representatives their idea of hiring of the 24-year-old this summer. 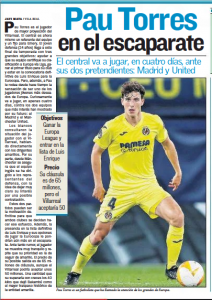 Villarreal’s next two fixtures will help both Zinedine Zidane’s side and the Old Trafford club to take a closer look at the player.

AS explain Torres has a €65m release clause in his contract, but Unai Emery’s side could accept an offer around €50m.