If this summer saw Manchester United buy a defender, a defensive midfielder and a striker, with the club also just missing out on a wide player, next year’s target seems to be a slightly more attacking midfielder.

Sergej Milinkovic-Savic appears to be high on José Mourinho’s list, at least according to reports, yet the Portuguese manager appears to have targeted an alternative in Serie A in AS Roma’s Lorenzo Pellegrini.

Corriere dello Sport are the ones reporting this on Tuesday, as they claim a scout who was sent by Manchester United to watch Radja Nainggolan was impressed by the midfielder’s performance.

This led the Red Devils to allegedly ring the player’s agent in order to find out a bit more about Pellegrini’s release clause, included in the deal he signed this summer meant to keep him in Rome until 2022. 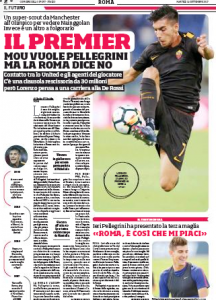 Corriere explain the figure stands at €30m, which is pocket change for a club like Manchester United, yet a big obstacle stands in their way, and that is the player’s love for AS Roma and his importance to the club.

Both the Serie A side and Pellegrini would love nothing more than a long relationship together, and Pellegrini is keen to emulate the likes of Daniele De Rossi and Alessandro Florenzi, who have both been at the club since the early 2000s.

Currently setting his sights on guaranteeing himself a spot in Italy’s squad for the upcoming World Cup, the 21-year-old isn’t currently interested in moving abroad, even if it does mean earning more money.

Is this all just an Italian media exercise using Manchester United to make Pellegrini look ultra committed to Roma? There’s every chance.