The hype around the midfielder is something real in the local media, since we’ve seen five different newspapers having him on their front pages today.

Newspapers Correio da Manhã and Jornal de Notícias both say that despite the big battle for the player, it’s Manchester United who managed to make the first moves for his signing.

Correio da Manhã’s story claims that Fernandes can leave Sporting for a minimum of €70m, despite his €100m release clause. And Manchester United are ‘slightly’ ahead of the likes of Chelsea, PSG, Atletico Madrid and Inter Milan.

The outlet says that Sporting are going through financial problems and now plan to make Fernandes their biggest sale ever. 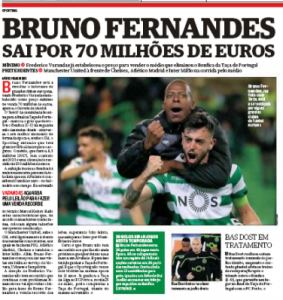 Jornal de Notícias, who call Fernandes a ‘jackpot’, say Manchester United are the ‘main candidates’ to sign the midfielder.

They say the Red Devils want a midfielder who can ‘attack the opponent’s goal’, and that’s what Fernandes has been doing best for Sporting.

The midfielder has 26 goals and 14 assists in 45 matches for the club this season, and it’s starting to look like €70m would be a fair price for him.

Paul Pogba | What to make of the latest claims around Manchester United star.

Separating the plausible truth from the likely assumption… we take a look.