Despite what might have been said in England, the Italian press don’t buy for one minute that Manchester United are close to signing Paulo Dybala.

No clause has been activated, and there’s been no mention of Ole Gunnar Solskjaer demanding the transfer.

However, it doesn’t mean they aren’t interested, as Gazzetta dello Sport look at possible landing points for the Argentine, who appears to be living his last few months in Turin ahead of the summer transfer window.

The Italian newspaper explain that both Bayern Munich and Manchester United have made ‘timid enquiries’ about Dybala, which they see as a sign ‘the game is in the making’. 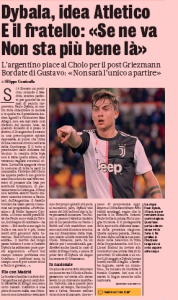 This comes after the player’s brother, Gustavo, explained his brother was ‘no longer at ease and happy’ at Juventus, citing on the pitch issues, such as lack of game time this season, as the reason behind the discontent.

Seeing as the season has yet to finish in Germany and England’s ended just under a week ago, we might need a little more time for teams to get into the full swing of things transfer wise, as clubs will look at easier deals to complete first.

They’ll likely leave the big and more complicated ones until later, not to get bogged down while the other targets slip through their fingers.