After being linked with moves to both Tottenham and Everton rather regularly, Matias Vecino now has a new suitor in the Premier League: Manchester United.

When you think about it, it really was just a matter of time before the midfielder found himself sent to Old Trafford by someone.

After all, both Inter and the Premier League side have done a lot of business with each other over the past year or so, with Alexis Sánchez, Romelu Lukaku and now Ashley Young all swapping the north of England for Milan, and it would only be fair for the Italians to send someone the other way for once.

Manchester United’s need for a new midfielder or two is anything but a secret these days, as shown by their seemingly never-ending chase of Bruno Fernandes, and yet they are still without reinforcements 11 days away from the end of the transfer window.

And Correio da Manha (who we already warned you about) present some Man City nonsense.https://t.co/Nn2kZLbRxz #mcfc

It’s Gazzetta dello Sport that bring the news they could be taking a look at Vecino, who appears to have been pushed to one side by Antonio Conte at the San Siro recently despite starting seven games in a row in the league between November and January. 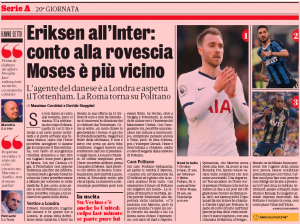 There’s been a lot of talk regarding an exit, and should the Uruguay international leave, Inter could dip their toes into the market once again to replace him.

There’s no mention of a price this time, but previous reports, like this one from Corriere dello Sport late last week, suggest the Serie A side would be looking for around €20m.

That’s far cheaper than what Sporting CP want for Bruno Fernandes, but, then again, their outputs differ greatly.