Ever since Nicolo Zaniolo broke onto the scene this season with AS Roma, we’ve covered stories surrounding his future.

At first it was Arsenal who had travelled to see Cengiz Under, only to return to London impressed with the young Italian.

Then, to the surprise of absolutely no one, came Manchester City, who have been a mainstay in the stories, especially since Zaniolo’s value has skyrocketed to €50m or so, but we’ve never had Manchester United… until now.

Corriere dello Sport are the ones mentioning the Red Devils on Tuesday, and while we thought at first they had made a simple mistake of switching the two Manchester clubs, that doesn’t appear to be the case. 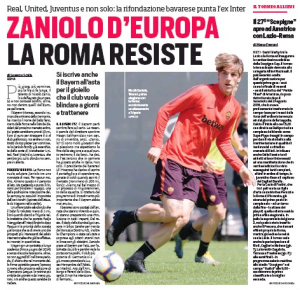 Manchester United’s inclusion in the list of clubs comes alongside Juventus and Bayern Munich, two other long-time admirers who have been placed next to Manchester City for months now.

Often fielded as an attacking midfielder, especially when Cengiz Under plays, the youngster does like to drift wide to the right-hand side to then cut onto his left foot, opening up his body and creating opportunities.

With the Red Devils needing someone down their right-hand side, this make some sense, even if the players they have been linked with suggest more direct players à la Nicolas Pépé or Hirving Lozano are their preference going forward.

Regardless of all this, it would come as a shock if AS Roma were to sell Zaniolo in the summer, seemingly preferring to offload the likes of Cengiz Under and Edin Dzeko instead of the young Italy international.

We suppose Manchester United had to be included at some point, right?