The defender’s contract lasts until 2022 and the report provides an insight on the conditions put forward by the 27-year-old to sign an extension.

It’s claimed the France international is asking for a pay rise, while Los Blancos are trying to lower their wage bill by asking their players to take a ten percent cut on their salary.

In addition to this, the centre-back feels he has a ‘thorn in the side’ following the criticism he received for his display against Manchester City last season.

Although he is loved within the dressing and well respected at the club, he has been subjected to heavy criticism from outside. This has made the World Cup winner ‘feel angry’ as he felt those harsh words directed at him were unfair.

These ‘inner feelings add to his desire’ of receiving a raise in his salary to sign a new deal with Zinedine Zidane’s side.

Real Madrid find it difficult to meet the player’s renewal conditions and therefore, they consider to ‘make cash’ from Varane’s sale in the summer. They value him between €60m and €70m. 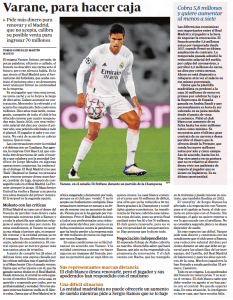 The Spanish giants are of the belief the player doesn’t want to renew because he ‘wants to leave’ after achieving ‘everything’ at the club. The Premier League has always ‘attracted’ Varane, where Ole Gunnar Solskjaer’s side are named as a suitor.

ABC explain Manchester United have ‘knocked on the door again’, years after their first attempt.

In the event Varane decides not to renew and Real Madrid offload him in the next market, they have his position covered since the club are close to agreeing a deal for David Alaba.