Home Europe Man United knew their bid for midfielder would be rejected, chose not...
SHARE

Bruno Fernandes could not leave Sporting to the Premier League on deadline day and after the biggest saga of the summer, all the Portuguese newspapers can talk about is what happened to the Lions’ captain.

Most outlets are all saying that Tottenham tried to sign the player until the end, but failed to match the conditions demanded by the Lisbon side.

And what about Manchester United, who were heavily linked to him for the entire summer? Well, there’s not a lot about that, although they do get a few mentions in the local press.

The only newspaper who really tried to bring a reason why the Red Devils never made a bid for Bruno Fernandes is A Bola. 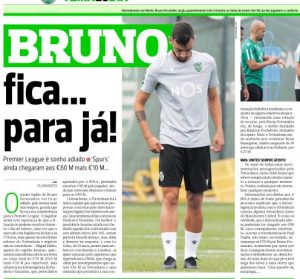 They say that after seeing Sporting’s resistance to the bids made by Tottenham, Manchester United have found the situation a little weird.

It’s said the Old Trafford side could get to €80m, but that amount was conditioned to the departure of Paul Pogba, which didn’t happen.

And since this other scenario meant they wouldn’t offer over €70m, United didn’t even bother bidding, to avoid having their offer rejected.

A Bola says it was ‘a matter of strategy’.

The other newspaper who talks about Manchester United is Correio da Manhã. They say Jorge Mendes had been in Manchester trying to find an agreement in the past few days, but couldn’t convince the Red Devils and Sporting to get to a deal done.