Manchester United are keeping an eye on Sporting left-back Nuno Mendes, according to claims from Portugal today.

Newspaper Record says the Red Devils had been in talks for the signing back in the January window, when the clubs negotiated the transfer of Bruno Fernandes.

Now Manchester United and Sporting are back in touch. Even though the Premier League side haven’t made an official offer yet, it’s ‘likely’ their scouting job over the player should be ‘intensified’ in the coming months.

It’s said the Old Trafford club have been following the 17-year-old for a while, and have already got hold of some personal information on him. 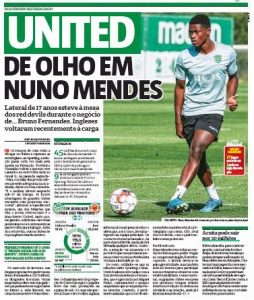 Record highlights the fact that the relationship between Manchester United and Sporting has been very good, especially after the transfer of Bruno Fernandes to the English side.

And it turns out that just like Fernandes, Mendes’ career is also managed by agent Miguel Pinho.

Record is pretty sure that one of these clubs is Manchester United, and adds that there are other Premier League sides in the race.

‘Contacts continuing’ with Everton despite club starting to look elsewhere at...

Arsenal ‘ready to launch’ for signing of Ligue 1 star –...