That is, at least, what Corriere dello Sport are claiming on Friday in their paper edition, announcing the Red Devils have joined Chelsea for this summer’s transfer window in attempting to convince both Napoli and the Senegalese defender that a move to England is the right choice for everyone involved.

Over the past few weeks, it’s been all about the Blues, with questions being asked to the centre-back’s agent, articles clarifying the situation regarding his non-existent release clause being published and so on…

Free to ask as much as they want for the Senegal international, Napoli are in a strong position going into the transfer window, and with Manchester United potentially starting a bidding war with Roman Abramovich’s side, there’s a good chance Aurelio de Laurentiis will be walking around like a Looney Tunes cartoon with dollar signs in his eyes. 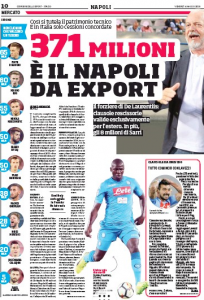 The price tag is said to be ‘at least €80m’, and there’s also the problem Koulibaly would ‘happily stay in these parts’.

By the sound of things, it all rests on what Napoli want to do in the summer.

Selling the Senegalese footballer would certainly fund their transfer window, but it would also weaken them defensively.

Basically, someone needs to come along with an offer they can’t refuse; probably one that would make Koulibaly the most expensive defender in history.

Manchester United would look to have the advantage, with the player’s agent making it clear Champions League football is important.