We absolutely hate to do this, because we don’t really believe the interest is there, but Corriere dello Sport, once again, have an article on Manchester United’s reported interest in Paulo Dybala.

We’re still trying to figure out why this is even a story at all, since the player, currently on holiday after the Copa America, has yet to meet Maurizio Sarri, but it’s a story nonetheless, and it’s best we cover it before someone else finds it and twists it into something more exciting than it actually is.

Once he returns to the squad, the Argentine will need to sit down with the former Chelsea manager to find out the role he’ll be used in and where he features in the pecking order, but the belief is he’ll feature as a false nine to accommodate Cristiano Ronaldo coming inside.

So it’s not like anyone is pushing for him to leave, unlike the Gareth Bale situation at Real Madrid, yet Corriere dello Sport believe that while Dybala isn’t up for sale, he isn’t unsellable either, as bids of more than €80m will be considered but only after he’s sat down with Sarri.

It’s explained Bayern Munich were the ones who pushed the most in recent months for the 25-year-old, but their interest has now stopped. 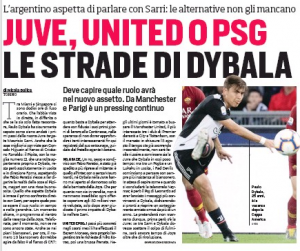 That’s where Manchester United come in, described as the ‘most interested’ Premier League club ahead of their local rivals Manchester City and London-based Tottenham.

With the transfer window closing on August 8th, that leaves them ‘little time’ to convince both Juventus and Dybala, but with ‘either Romelu Lukaku or Paul Pogba leaving’, the Red Devils ‘are starting to think about the Juventus player with growing insistence’.

Considering both Bruno Fernandes and (the most recently linked) Nicolas Pépé would suit the way Ole Gunnar Solskjaer wants to play more than the Argentina international, we aren’t really sure where this is all coming from.

Someone has to be driving this story, and the only realistic conclusion we can come to is a Juventus need for a big sale.

And with Joao Cancelo to Manchester City refusing to get over the line, this seems like the most ‘reasonable’ alternative.