Manchester United are ‘interested’ in Barcelona’s Ansu Fati, according to a ‘confidential’ report from Sport.

The 17-year-old lost his place in the squad following Martin Braithwaite’s arrival at the Camp Nou in February.

He would struggle to get regular minutes next season because of the return of Luis Suárez and Ousmane Dembélé from injury, and the potential arrival of Lautaro Martínez.

Jorge Mendes shares a good relation with the youngster’s entourage and the super-agent wanted to find a solution for the player. Barca were surprised when Mendes called in a few weeks ago to ask about his price tag.

The Camp Nou side made it clear Fati is ‘non-transferable’ and referred to his €170m release clause. They were convinced no one would pay the buyout clause and had forgotten about it, until Mendes came back to them about 10 days ago.

It’s claimed there are several Premier League clubs interested in the attacker and the Portuguese representative presented a ‘formal offer of €100m’ for the Spain U21 international.

That’s when Manchester United get a mention and Sport add the Red Devils were ready to take the next step by paying an ‘astronomical amount’ for Fati.

According to the report, the Old Trafford club would do that by ‘renouncing’ the option to sign Borussia Dortmund’s Jadon Sancho. It’s not clear whether or not the ‘formal offer of €100m’ for Fati was submitted by United.

The proposal was so huge that the sporting leaders were forced to send it to Barca’s board of directors to take a final decision. However, the Spanish champions have made it clear they have no plan to sell Fati and the same has been communicated to Mendes. 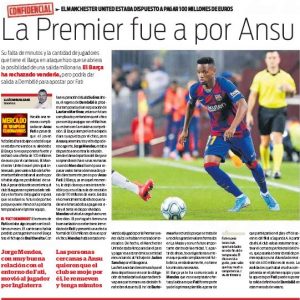 This feels like more hype from the Catalan media around Fati, with Manchester United’s name being used, as it often is.