A couple of days ago we covered claims from Brazil that Eder Militao is of interest to several clubs, including Real Madrid.

However, in a recent meeting over the potential transfer, it was claimed the Spanish club had been informed the Porto man prefers a move to England.

Luckily for him, there’s interest reported, and the Brazil report stated Manchester United, Liverpool and Everton are all keen.

Those claims have been bouncing around in the Portuguese media, and in their Thursday edition, Record take it a step or two further, having spoken to the player’s agent.

Ulisses Jorge was keen to calm things down, and said: “No one from Real Madrid spoke to me, I do not know anything. No one from England spoke to me either. I have received many contacts for him, but this is normal, because Militao has the quality to play in any club.”

Then he lit things up again a little by revealing he’s set to travel to England: “It’s part of my work, I’m going all over the place, like Italy and other countries.” 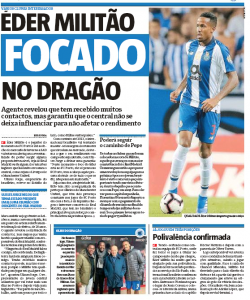 Record say a January move is possible should a club, with United named one of the English ‘sharks’, put forward an offer that Porto find too good to turn down.