Alex Telles very much deserves a move to the big time.

The FC Porto player has repeatedly been linked with Premier League clubs such as Leicester City and Chelsea, yet when it’s come to the crunch they’ve gone for different options.

Now it’s Manchester United who are said to be pushing ahead.

Monday’s edition of A Bola states Ole Gunnar Solskjaer’s club have ‘intensified contacts’ to sign the Brazilian left-back. Sevilla are also presented as keen, but it’s made clear United are very much out in front.

A Bola explain the deal is so far down the line that Telles’ representatives have travelled to Manchester, with the intention of pushing everything along and concluding a deal.

This could be a good value signing for Manchester United, considering the 27 year old’s contract with Porto expires in June 2021. 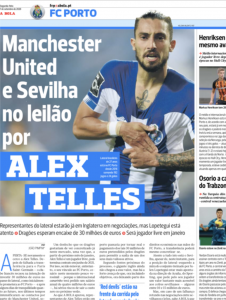