Manchester United ‘insisting’ on signing Atlético Madrid’s Kieran Trippier in the summer has been repeated regularly by the Spanish sports media over the last couple of days.

After strengthening the heart of the back four and the attacking position, the Red Devils want to bring in the 30-year-old to bolster their right side of defence.

That’s according to Mundo Deportivo, who say Los Rojiblancos sporting director Andrea Berta has a ‘task ahead of him to definitely close the squad’ ahead of new season.

However, Berta has concerns pertaining to certain players, including that of the former Burnley man.

Diego Simeone’s side ‘do not have the slightest intention’ to let go of the right-back in the ongoing window. 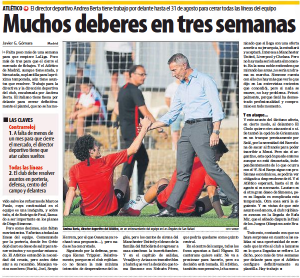 Still, the interest shown by United, and the player and his family’s ‘desire’ to return to the UK, ‘sows uncertainty’ over his continuity at Wanda Metropolitano.

Even though the Spanish club have no plans to cut ties with the player, United’s ‘sirens’ and Trippier’s ‘desire’ for the transfer ‘worries’ Atlético.