A Bola today carry on the Eder Militao to Manchester United rumour, although they bring Chelsea into the picture as competition.

Earlier this week, Duncan Castles was first with the story of interest from the northern Premier League club, and the Portuguese press haven’t left it alone since.

It’s well known that Manchester United scout Porto repeatedly, almost every single match they have an official present. That in itself isn’t much evidence of interest, because the English club scout so many Portuguese matches that there’s no real pattern.

What it does signal is that Jose Mourinho’s transfer spies will certainly know about the Brazilian, given his good performances in the heart of Porto’s defence this season.

A Bola say preliminary contact has been made with the player’s agents, named as 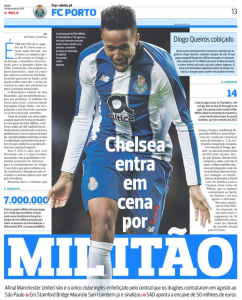 Giuliano Bertolucci and Kia Joorabchian. Manchester United want to know the conditions on which a transfer can be completed.

And, as far as A Bola are concerned, the conditions are very clear. A club must pay the player’s €50m buyout clause. It’s a fixed price with no negotiation, at least at this stage.