Perhaps it was inevitable that L’Equipe would push a late Layvin Kurzawa to Manchester United story. It seems the half bothered transfer rumour the world really needs right now.

Alternatively, Jose Mourinho may have realised right at the death that his chances of a central defender, or at least one he really wants, are slipping away and he may as well sign a fullback instead.

Kurzawa has been ‘courted’ by Manchester United ‘in recent hours’ according to the French newspaper.

The change heading towards the deadline means ‘an offer cannot be excluded anymore’, the Premier League club have ‘enquired very concretely on the feasibility of the file’. 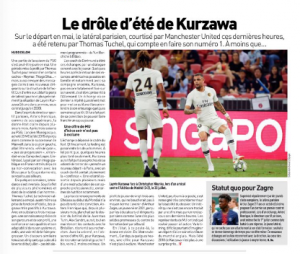 Manchester United have made it clear they want to ‘take action’, but L’Equipe believe an exit at this stage is ‘difficult to imagine’.

Perhaps tellingly, much of the article is made up of explaining just how much Thomas Tuchel likes Kurzawa and how well the men have been getting on since the German manager took over.

'Alexis Sanchez earns more than €20m. This didn’t go unnoticed in the Pogba camp, led by his agent Mino Raiola.’