The Robert Lewandowski situation rumbles on in Germany.

Bayern Munich have been very clear in their stance not to sell the player and it’s difficult to see how that could change. Even if a ridiculous offer was made, Bayern may feel it’s a status issue and still knock the bid back.

Despite that, claims of interest continue, and SportBild say Manchester United are a ‘hot candidate’ to sign the Poland international. The German magazine believe Lewandowski has been at the top of the Old Trafford striker wish-list for some time.

With Jose Mourinho already having Romelu Lukaku, Marcus Rashford and Anthony Martial, he doesn’t really need the Bundesliga star. It would be unlikely Mourinho would want to play Lukaku and Lewandowski together, and it would seem equally strange for either man to spend a lot of time on the bench. 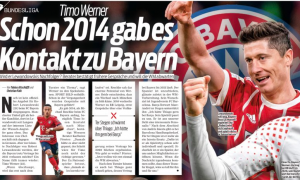 This is an unlikely one and, as it’s felt sometimes in the past, maybe Bayern Munich are pushing around the idea of Manchester United wanting one of their players but not being able to get him.