Slowly but surely, the Italian press are sending Nikola Milenkovic to the Premier League.

They’re not entirely sure exactly where yet, but their inkling is that it’s most likely Manchester United, who have been after the Serbian since José Mourinho was in charge.

This is continued by Corriere dello Sport on Wednesday, who look at what Fiorentina are planning on doing next, with staying in Serie A their prime goal.

Cesare Prandelli’s men are currently 14th in the league, a good 10 points above the relegation zone, but with 15 games to go, anything can happen.

Once they’ve achieved that, Rocco Commisso, their owner, is planning a sort of revolution at the club to get them back near the top.

One thing they are aware of, however, is that it will be ‘very difficult, near impossible, to convince Milenkovic to renew’. 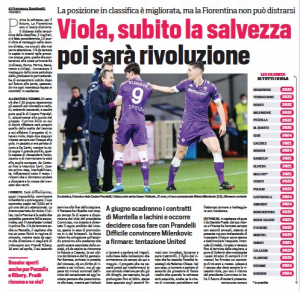 With a contract expiring in 2022, he’s one of the ‘most watched’ by other clubs, and ‘the Premier League is the reality that could guarantee economic follies, with Manchester United in the front row’.

It’s further stated that a move to Old Trafford could be a ‘temptation’ for the 23-year-old.

They’re the only Premier League club mentioned here, despite Liverpool also being touted in the past, but don’t discount the Reds just yet, even if Ole Gunnar Solskjaer is the one in a bigger need of a centre-back next season compared to Jürgen Klopp, who will get Virgil Van Dijk and Joe Gomez back.

Either way, it’s very likely that Fiorentina will sell Milenkovic in the summer, which will in turn help them fund their so called revolution.