Home Europe Man United forward a ‘concrete possibility’ for Serie A side, have already...
SHARE

Once again left out of the first-team against Swansea at the weekend, Anthony Martial, for all the love the Manchester United fans have for him, could be interested in looking elsewhere in the summer.

Blocked by the arrival of Alexis Sanchez, the France international isn’t getting the game time he needs to develop further as a footballer, and with Marcus Rashford having the home town advantage, he’s basically third in line to play down the left-wing.

This is why there have been rumblings of an exit in the summer, with Juventus the recurring destination, as the Serie A leaders look to strengthen their attack in the coming transfer window.

Tuttosport are the ones pushing this story on Thursday, explaining the Italians have already started moving towards trying to get something done, having following him since his time in Lyon’s youth team. 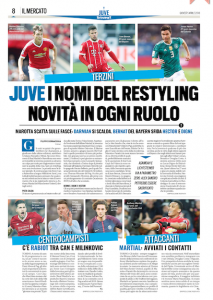 The Frenchman is described as a ‘concrete possibility’ for the summer window, and even though he would require quite the investment to be signed, he’d be worth it thanks to his ability, youth and versatility.

Potentially used down the left, Martial could also be fielded through the middle in case of a Gonzalo Higuain absence.

His arrival would also almost certainly lead to Mario Mandzukic’s exit, who has multiple suitors around Europe, including some in the Premier League.

It makes sense, but there’s a feeling that if Martial is sold, Manchester United fans could riot (via Twitter), and that’s something Ed Woodward will probably want to avoid.