With actual football now a thing of the past in Italy after Serie A dramatically shut its doors for the summer at the weekend with Atalanta and Inter securing the last two Champions League spots, transfer stories are filling column inches on Tuesday.

The nerazzurri take Gazzetta dello Sport’s front cover thanks to Antonio Conte, who is in line to replace Luciano Spalletti, which means the obligatory story about Manchester United’s Romelu Lukaku.

However, this one isn’t just your usual tepid update about how wages could be difficult for Inter to match.

No, this one has actual interesting detail in it.

We’ll start with the claims from Gazzetta from last week, who explained Inter tried to include Ivan Perisic in a deal for the Manchester United forward. 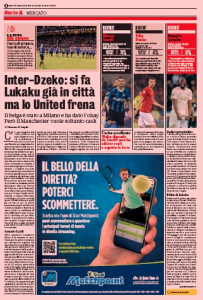 Unfortunately, that didn’t work out as the Croatia international was a target for José Mourinho, and Ole Gunnar Solskjaer wants nothing to do with the ageing winger.

The Red Devils are said to only want cash for Lukaku, and they’ve set the bar at €70m.

That’s the main problem for Inter, as the wages are apparently already sorted, according to Gazzetta, after the Belgian star travelled to Milan ‘a few weeks ago’ and met up with members of the Serie A side’s board.

Lukaku reportedly agreed to lower his wages in order to potentially ‘marry’ the club’s project, which is when the Italians started probing Manchester United for information about getting a deal over the line.

Now unable to use Perisic as a makeweight, things have suddenly got a bit more complicated for Inter, and unless they find the cash to meet the Red Devils’ demands, convincing Ed Woodward to sell could prove difficult.

They already know how stubborn the CEO is from their attempts to sign Matteo Darmian over the past 12 months.