Portuguese newspaper A Bola brings today an interesting update on the battle for the Sporting midfielder Bruno Fernandes.

The outlet makes it pretty clear that the Lions are expecting an auction for the player, and the current highest bid is the €55m one made by Manchester City.

Yes, yes, we know this has been denied, but bear with us, we’re explaining what is claimed today.

The English champions didn’t want to offer much since they’re also interested in sending Sporting two players, with salaries all paid by Pep Guardiola’s side.

However, ‘everything indicates’ that Manchester United will soon make their own bid, ‘naturally’ of a bigger amount. 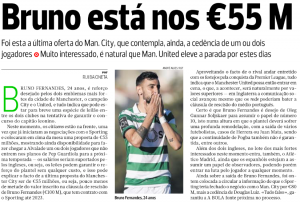 The outlet says once again that Bruno Fernandes is a ‘desire’ of Ole Gunnar Solskjaer to take the role of a number 10 in a team which is going through a big rebuilding process this summer.

It’s claimed Manchester United should take this period when their rivals are celebrating the Premier League title to finally take action in the chase.

That seems a little optimistic. If City are keen, they’re hardly going to be lounging the offices for the next two weeks with hangovers, forgetting the players they planned to move for this summer.

A Bola also takes claims from this week which said Sporting closed a deal with Manchester City of €80m plus Douglas Luiz for Bruno Fernandes, and were told by their sources that it’s ‘all false’.