They were keen to sell him whilst the European window was still open, and Manchester United, according to the Italian media, made serious attempts to get the striker to Old Trafford.

Having seen the back of Romelu Lukaku, the Red Devils left themselves short in attack, something which was further underlined when Alexis Sanchez followed his former teammate to Inter Milan.

Mandzukic wasn’t hugely keen on the move, and thought he could force his way into Maurizio Sarri’s plans at the Turin club. That hasn’t been the case, with not a minute of football to his name so far this season.

Juve have tried to push him to Qatar, where the window remains open, yet the 33 year old isn’t keen on that either. 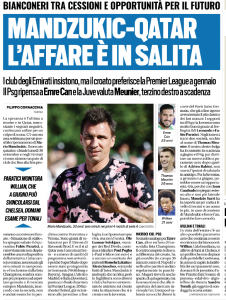 Tuttosport report the January window is now starting to look likelier, and Manchester United get a mention, although it’s made clear they’re not the only option for a winter move.

It’s stated they came ‘very close’ to signing the Croatian during the summer, and are ‘always alive’ in the chase.