We’ve reached the point where it’s fair to say very few people (outside of those directly involved) have any clue what is going on behind the scenes when it comes to Manchester United and their interest in Kalidou Koulibaly.

There’s no denying the Red Devils are most likely interested in signing the Senegalese star because, well, who wouldn’t be, but beyond that, it’s just a clusterfudgesicle of contrasting reports, all claiming very different things.

It all really kicked off when Aurelio de Laurentiis revealed he turned down a £90m bid from a Premier League club, which was widely believed to be Manchester United.

We were then treated to a lovely claim that the Red Devils had seen a €110m (£97.6m) turned away by the Napoli president.

Now, thanks to Corriere dello Sport, there’s a belief that Ole Gunnar Solskjaer’s side are have a €95m (£84.3m) bid ready for Koulibaly, which is explained won’t be enough. 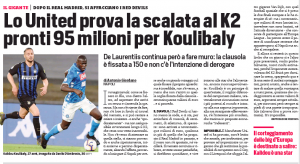 Looking at those three stories, it’s fair to say they don’t really add up.

If Manchester United have indeed seen two bids (one of £90m and the other of £97m) turned down by Napoli for the defender, why on earth would they suddenly prepare an £84.3m one?

We know there’s a wide belief Ed Woodward is rather inept at negotiating with other clubs, but surely he isn’t this bad at it?

After all, he has secured many tyre and paint sponsorships for the club.

Those were just three of many, many claims, but the bottom line is, there’s a very slim chance of Koulibaly leaving his current club this summer as Napoli have no need to sell and are in the Champions League next season.

If Manchester United end up offering €150m (the alleged amount of his clause), things might change, but the likelihood of that happening under Solskjaer is as slim as the defender playing anywhere other than in Naples next year.

Manchester United trying to get fee for player – As interested...