It’s hard to keep up with who Manchester United are interested in to bolster their defence, but the general consensus is that Raphaël Varane is the prime target.

There have been enough articles to write a book about the matter, and yet the deal still isn’t done, meaning alternatives need to also be looked at.

Younger options such as Cristian Romero and Jules Koundé also appear to be on the list, as is an old favourite of the transfer rumour mill: Kalidou Koulibaly.

Despite his stock taking a hit and Napoli needing to sell, Aurelio De Laurentiis still refuses to gift one of his more expensive players, which is causing a few issues.

Namely, the centre-back wants clarification regarding his future, because whether he stays under Luciano Spalletti or goes, he can then ‘dedicate himself entirely’ to whatever project he is part of.

Corriere dello Sport are the ones reporting this, and they claim that a number of Premier League sides have reached out to the player’s agent, Fali Ramadani, including Manchester United. 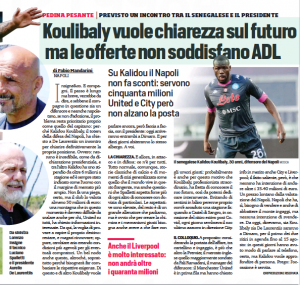 In fact, the Red Devils are said to be ‘in the front row’, ahead of the named Manchester City and Liverpool, but the problem for Napoli is ‘no one intends to go beyond €35-40m.

That’s a price ‘far from the evaluation of Napoli’, who are said to value him at ‘at least €50m’.

Manchester United have reportedly ‘asked for information’, but it appears what they were told wasn’t quite what they wanted to hear.

At least, for the time being.