Home Europe ‘Not even €40m’ – Manchester United have snubbed signing chance, even at...
SHARE

Napoli’s Kalidou Koulibaly has been linked with a move to Manchester United repeatedly over the years, ever since José Mourinho was in charge at Old Trafford.

Neither the Red Devils nor any other side have been successful in taking the defender away from the Serie A club.

Ole Gunnar Solskjaer’s side were in the market for a new centre-back in the summer and they strengthened the position by signing Raphaël Varane from Real Madrid.

The English club looked at the Senegal international in the last window, if today’s edition of Corriere dello Sport is to be believed.

The newspaper explains the 30-year-old is enjoying his football at the Naples club after ‘difficult years’ in the last two seasons.

Corriere even state the former Genk man is ‘one of the best defenders in the world’ and also suggest Manchester United never showed any willingness in meeting the price tag set by Napoli for Koulibaly in the last window. 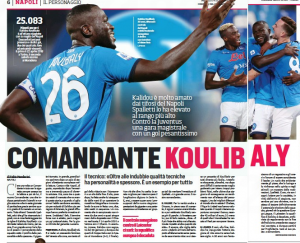 appropriate: including bonuses, not even €40m’.

That €40m if far less than what Napoli have wanted previously.

United ended up with Varane, who is close to two years younger than Koulibaly and has more experience of playing at the highest level than the Napoli star.

Not a bad choice, really.