Paul Pogba’s contract lasts until 2021 and Manchester United retain an option to further extend it by a year.

Last week, the midfielder admitted it’s his ‘dream’ to play for Real Madrid.

Monday’s edition of AS explains the Red Devils have ‘put in place the mechanism’ to sign Rennes’ Eduardo Camavinga, if his compatriot decides to leave Old Trafford.

The youngster’s current deal runs down in 2022 and after having turned down a renewal offer from the Ligue 1 side, there’s belief he will be available for a reasonable price next summer.

It’s claimed the 17-year-old’s signing was an ‘express request’ of Zinedine Zidane in the last window and a few months ago, the Spanish champions started contacts to secure his services.

However, the idea of bringing the teenager to Madrid in the recently concluded window was ruined due to the Covid-19 crisis.

Camavinga is managed by Mousa Sissoko and the agent sent a message to Real Madrid saying he cannot assure if his client will “still be available” next summer.

According to the newspaper, United are posing a ‘great threat’ to the La Liga winners for the Rennes starlet.

AS adds Ole Gunnar Solskjaer’s side ‘already seems to take Pogba’s departure for granted or at least wants to watch their backs in case that happens.’

Sissoko also manages Barcelona’s Ousmane Dembelé, who United failed to sign in the transfer window that closed earlier this month. 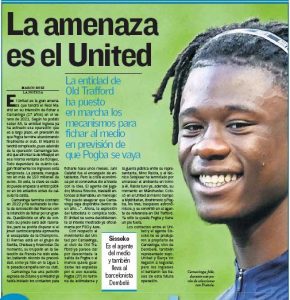 Manchester United have ‘strongly’ joined the likes of Real Madrid, Paris Saint-Germain and Juventus for Camavinga, and their failed attempt to sign Dembelé laid ‘the foundation’ for the ‘future operation’ involving the Rennes midfielder.

AS, however, doesn’t mention if the Old Trafford club will still make an approach for Camavinga if Pogba commits his long-term future to United.