On Thursday, Sport Witness covered claims from Italy that Jose Mourinho wants Manchester United to complete the signing of Leonardo Bonucci ‘quickly’ because he’s concerned there could be an auction for the player if things are taken at a calmer pace.

Then, on Friday, there was nothing. We scoured the Italian newspaper for an update but it wasn’t to be found.

However, there’s joy on Saturday with Gazzetta dello Sport coming to the rescue. There’s not much to add, just that Manchester United continue to ‘court’ the player, to convince him on a move to the Premier League club.

Usually, this kind of switch would be talked down by the grand old Italian newspaper, but they say Bonucci staying at AC Milan can no longer be taken for granted given the club’s two year ban from European football. 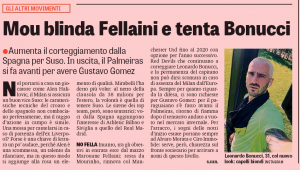 Bonucci is 31 years of age and surely has a big European football itch to scratch given how he came so close to winning the Champions League with Juventus.

AC Milan fans are also informed they won’t be signing Marouane Fellaini after the midfielder renewed his contract at Manchester United.

Manchester United man ‘annoyed’ by new ‘impasse’ in exit – Will...

Club ‘thinking’ about late move for Tottenham defender – Looking at...