Italian newspaper Tuttosport has a special this week covering Napoli’s next transfer market, naming all the players who could leave the Serie A side in the summer.

One of these stars is Kalidou Koulibaly, whose performances in Italy have been making him one of the most wanted defenders in the past few years.

The outlet says there are three big clubs who could be signing him next summer, which are named as Manchester City, Manchester United and Paris Saint Germain.

It’s said all of these sides have been in ‘constant contact’ with Napoli president Aurelio De Laurentiis, eyeing the signing of the 28-year-old. 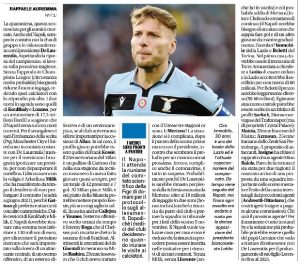 The reason Koulibaly hasn’t moved yet has always been his price, although that’s not specified by Tuttosport this time. All the newspaper says is that Napoli could make €130m with the sum of the sales of him and Arkadiusz Milik.

Currently rated at by Transfermarkt at €56m, Koulibaly has been linked to Manchester City and Manchester United many times before.

As each summer goes by, the transfer feels less valuable, which won’t please Napoli.