Home Europe Man United have ‘clear ideas’ and plan to use player as tool...
SHARE

It’s explained Arsenal have ‘probed the ground’ over the player’s signing, whilst Valencia, Everton and West Ham ‘don’t give up’. Those clubs are described as ‘fearsome competitors’, but it’s believed the Tuscany side hold a distinct advantage.

Interest from Old Trafford in 21 year old Nikola Milenkovic is referenced and La Nazione explain Manchester United would like to push Pereira to Fiorentina to help relations with with the club ahead of a move for the defender.

The Premier League club are said to have ‘clear ideas’ on the matter and edging Pereira to Fiorentina is the plan.

If not now then ‘certainly in June’.

Pereira’s contract expires in June and whilst there’s an option of a further year, that’s apparently down to both parties. 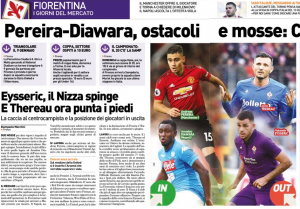 The 23 year old would certainly have some say in where he goes and for any loan move to happen this month or in the summer, and United to have any meaningful power over it, then a minimum of the year extension needs to be useable and then activated.

It’s different if Manchester United plan an attempt to use their player as bait via a permanent transfer this month, but Pereira would again have a big say.