Whenever there is doubt over the Real Madrid managerial situation, someone somewhere will link Jose Mourinho.

Despite the current Manchester United manager leaving at least partially scorched earth behind him at the Spanish club, there’s long been a thought he could return and form an axis of evil with Florentino Perez to try and get the club a league title.

With Julen Lopetegui having a poor start to his career as boss of Los Blancos, the rumours, albeit weak, have inevitably come out.

Monday’s edition of Marca linked several managers with potentially taking over, and Mourinho wasn’t one of them.

On Tuesday the same Spanish newspaper explains that the Old Trafford boss killed the claims ‘in less than a minute’ during his press conference ahead of the match against Juventus. 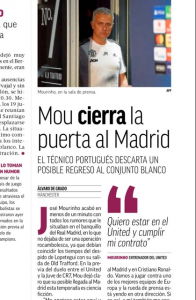 They report it would have been a ‘bizarre operation’ anyway, trying to balance Lopetegui going and getting Mourinho in, and was therefore purely ‘science fiction’ that the Portuguese could be taking over from the Spaniard anytime soon.

In football the unthinkable often has the habit of happening, but for now this one is clearly unlikely.