With Manchester United being one of the Premier League sides who are the most attentive to the Portuguese market, it’s absolutely no surprise that they’re named in the race for Benfica star Darwin Nunez.

With a wonderful season for the Eagles, and striker continues to be linked to several European giants, and the Red Devils are one of them.

Today, Manchester United are mentioned by newspaper Correio da Manhã. The newspaper writes that the Old Trafford side ‘have been very attentive’ to Darwin’s form this season.

Now the big news in this story is the price for his signing, because it says Benfica ‘believe’ they can break the record of João Félix’s sale to Atletico Madrid, which was of €120m. 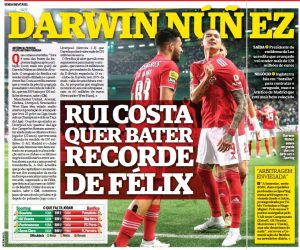 Manchester United would maybe just have to hurry a little, because besides the many names in the list of pretenders, there’s a strong interest from Atletico Madrid which could be boosted by their good relationship with Benfica.

Darwin Nunez now has 33 goals this season, some of those against Barcelona, Bayern Munich, Ajax and Liverpool.