Manchester United and Arsenal both had officials at Porto’s match against Tondela on Friday, with A Bola believing they know who the target is.

The Portuguese newspaper say both clubs are keen on Danilo, with him being the ‘preferred target’.

Porto won the match 1-0, with Moussa Marega scoring the game’s only goal. Despite Marega deciding the match, A Bola believe the best player on show was Danilo. The midfielder was rated as 8/10 which is a really good mark for Portuguese newspapers.

The 26 year old is in great form, and that could lead to the claims Manchester United and Arsenal want him. 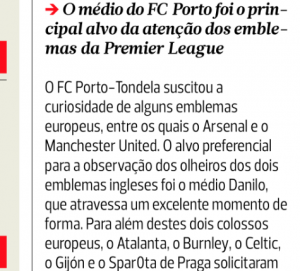 Unless the scouts present were happy to reveal who their target was, or someone spied on the notes being taken, it’s difficult to know how A Bola can be so sure it’s Danilo Manchester United and Arsenal are keen on.