Real Valladolid have struggled in the league this season and are 15th in the table, but having conceded only 25 goals, they boast the best defensive record for a team placed in the bottom half of the table.

Mohammed Salisu has been one of the main reasons for that and the centre-back’s impressive displays have caught attention from clubs in Spain and around Europe.

On November 25th, El Diario De Valladolid reported Manchester United have watched the 20-year-old in action ‘the most’.

Salisu is on the front page of today’s edition of AS and it’s mentioned the Red Devils, along with Atlético Madrid, Getafe and Valencia ‘have already asked’ about the defender.

Though the main report focuses on Real Madrid and Atlético, a small section mentions Ole Gunnar Solskjaer’s side. 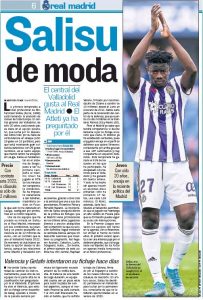 It’s claimed there are several Premier League clubs who have the Ghanaian on their agenda, but Manchester United are ahead of them.

Salisu’s contract at Valladolid expires in 2022 and he has a €12m release clause, so wouldn’t be an expensive signing.