Marca haven’t been quite as excitable as others when it comes to Alvaro Morata to Manchester United. When Spanish radio last week claimed a deal had been agreed and Morata was set to travel for a medical on Monday, and much of the European press followed them, Marca largely stood back.

There were a couple of articles about interest, Jose Mourinho’s determination, and Morata’s will to leave Madrid, but nothing to suggest Monday would be the day. And they were, of course, right.

In their Tuesday edition, Marca don’t make a big song and dance either, just a rather low key article looking at the situation. It’s stated once again that Real Madrid are working to push the price higher, now asking for ‘more than €80m’, but it’s the personal terms which stand out for Marca in what they believe would be a record transfer on more than one level.

The Spanish newspaper say Morata and Manchester United have agreed on a five year contract, with a salary of €22m per year. Each year Morata will receive a further €2m for image rights, with €1m for image rights going to an associated company. 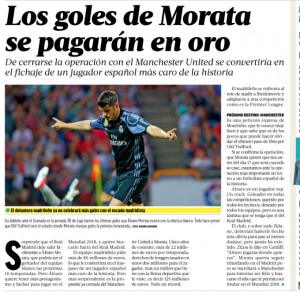 That, even by modern football standards, is huge. If true, and if a deal happens, it would see Morata paid €480k per week. Figures which are, in all honesty, hard to believe.

Anyway, assuming he has agreed terms, and that Madrid and Manchester United agree a fee, something which Marca feel isn’t done yet, then it’s explained the player will want it all sorting out before the 17th… because he’s getting married.