Catalan newspaper Sport run with a headline on Friday saying ‘Mourinho takes a ‘pearl’ of Espanyol’.

It’s claimed Manchester United have agreed a deal to sign Arnau Puigmal, who is part of Espanyol’s youth system. Born in 2001, Puigmal is described as one of the greatest hopes of the Espanyol quarry, so losing the player to Manchester United is something of a blow.

Sport believe there’s a willingness at Old Trafford to strengthen the club’s youth ranks, spurred on by rivals Manchester City working hard to recruit some of the best young footballers around.

Puigmal is described as being a very physical midfielder, versatile, and having a good eye for goal. He recently scored against a Barcelona youth side, and impressed during the MIC tournament.

That tournament was held in Spain last month, and Manchester United sent a team to compete. As the club’s youngsters were impressing on the pitch, it seems Mourinho’s 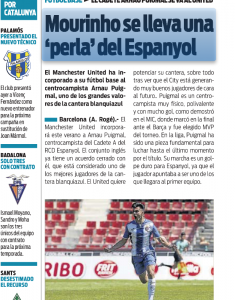 scouts were at work, and Sport point out that Puigmal was named the MIC’s MVP.

Manchester United have upped their scouting around the world since Sir Alex Ferguson left the club. All of David Moyes, Louis van Gaal, and Jose Mourinho encouraged extra work to pinpoint the best talents around the world.

The past season has seen Manchester United scouting at perhaps unprecedented levels, and Arnau Puigmal’s signing would look to be a result of those increased efforts.