Pep Guardiola will likely be sticking around at Manchester City longer than many people thought he would.

The former Barcelona manager has found a club prepared to work just the way he wants, give him freedom and the very best facilities, and of course provide backing in the transfer market.

It’s a slightly different situation to what he had at Bayern Munich. At the German club there are several powerful figures and any single manager, even Pep Guardiola, is just that.

At Manchester City it seemed the entire ethos, progression plan and investment had been designed, at least partly, around getting Guardiola as manager.

It’s unlikely to be his last job in football, and speaking on Spanish TV, Guardiola has revealed a wish to return to his roots at Barcelona. 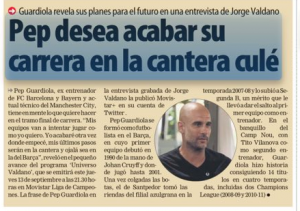 Catalan newspaper Mundo Deportivo quote the manager as saying: “My teams are going to try to play as I want. I will finish again where I started, my last steps will be in the quarry and I hope it will be at Barca.”

‘Quarry’ is how a youth system is referred to in Spain, from the slant of mining for young talents.