On April 8th, Onda Cero’s program El Transistor explained that Rodrigo wants to leave Atletico Madrid in the summer because of interest from other clubs, including Manchester City.

It was reported the midfielder has already informed the La Liga outfit’s board and his agent about his decision to leave, and it was also stated the English champions could pay the 22-year-old’s €70m release clause.

Mundo Deportivo were quick to play down these claims on Monday.

AS now talks about the rumours of growing interest from clubs in the Madrid-born player, particularly from Manchester City, as manager Pep Guardiola ‘loves’ him.

Another report in the print edition of AS takes a look at the claims made by Onda Cero.

Amid interest from clubs, Rodrigo is ‘untouchable’ for Diego Simeone and he considers the player ‘non-transferable’.

The Argentine knows the midfielder has great potential and the sporting leaders of the club believe Rodrigo will lead their side’s midfield going forward, along with other key players.

It’s further stated the Madrid based club are ‘calm’ about the whole situation around Rodri because the player is happy with his current employer. 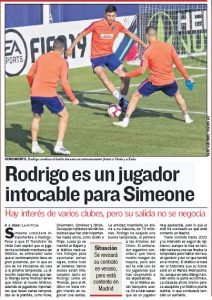 His contract at Wanda Metropolitano runs down in 2023 and in the summer, Los Rojiblancos will open talks for a new deal so that they can increase his release clause.

Even though Guardiola ‘loves’ his compatriot, it looks difficult for Manchester City to take him away from Atletico.