Despite big expectations from the Lions to sell the full-back this summer, it’s been said that the talks with the Premier League side reached an ‘impasse’, with no bids made so far.

Now with the possibility of a summer deal looking unlikely, local outlets admit that this transfer could be left for later.

Newspaper A Bola today features a story saying Sporting are about to close a deal for the signing of Wolves left-back Ruben Vinagre, with him set to arrive at the club to be a back-up option for Nuno Mendes.

Regarding the future of the 19-year-old, A Bola writes that Manchester City ‘continue to be interested and could advance already in this market or later in January’s’. 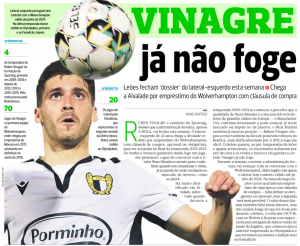 The newspaper adds that Real Madrid have already ‘marked their position’ in the race as well, even though there are no details on the La Liga giants’ efforts to sign the teenager.

The word in Portugal has always been that Sporting plan to make over €50m from Mendes’ sale, and it could simply be that what he’s shown in his first season as a professional still wasn’t enough to convince Manchester City to spend that much.