Barcelona have received encouragement to sign Ferran Torres in the winter market due to the firm willingness showed by the Manchester City player to arrive at the Camp Nou.

The forward is an ‘express request’ of Xavi Hernández and in order to fulfil the manager’s wish, Barca chiefs Mateu Alemany and Ferran Reverter recently made a trip to Manchester.

According to Mundo Deportivo, the Citizens ‘did not completely refuse’ the 21-year-old’s exit. The English champions are ready to negotiate, but will not give a discount to the La Liga side.

It’s claimed the difference between the demands made by Pep Guardiola’s side and what Barca are willing to offer is ‘salvageable’. No figures are mentioned in the report at that stage.

Torres has already asked Pep Guardiola if he can leave the Etihad and if required, he will ‘insist’ for a transfer. The ex-Valencia man has already agreed to take a pay cut to arrive at the Camp Nou. 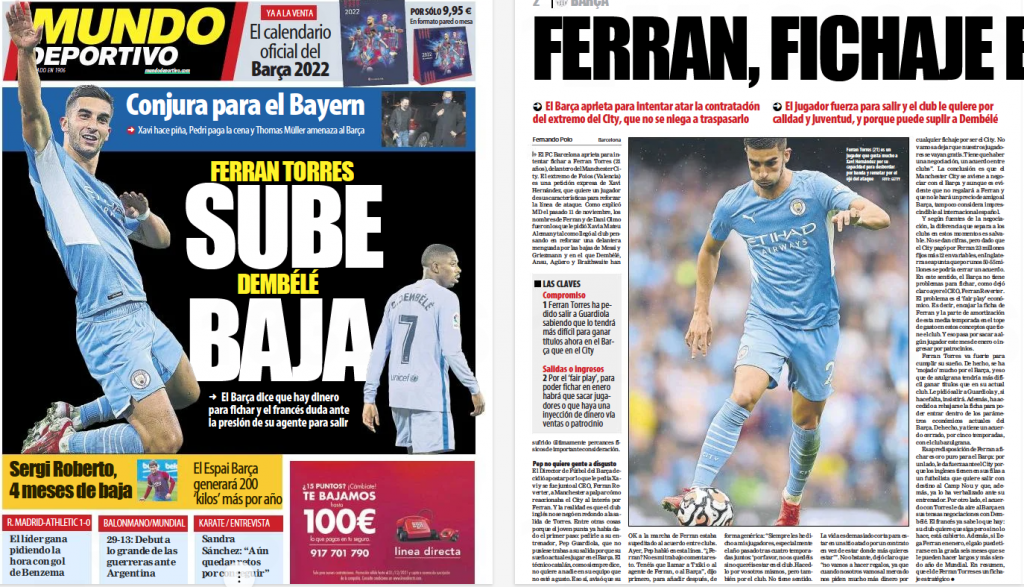 This is an advantage for Barca because City have a player at their disposal who wants to leave and has verbally communicated the same to the manager.

Should the Spain international arrive at the club next month, Xavi’s side will consider sending Ousmane Dembélé to the stands, without a renewal. In other words, Torres is a ‘strategic signing’ for Barcelona for more than one reason.

Journalist Xavier Bosch, writing for the back page of Mundo, says Torres is a ‘three-in-one’ signing for Xavi.

Barca CEO Ferran Reverter has already admitted the club can make signings in January and this comes as a relief to sign the City attacker.

Bosch says Torres not only wants to join the Blaugrana, but the Premier League winners are ‘willing to negotiate an immediate exit’. The price ‘could oscillate around €60m’. 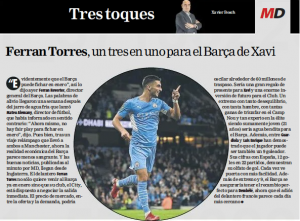 His signing would be a ‘great present for Xavi’ and a ‘future investment’ for the club.

Torres’ statistics for both City and Spain, his age, qualities, hunger and eagerness to succeed at the Camp Nou would mean his signing will be like a ‘holy water for Barca’.

In addition to this, he will also be a ‘perfect replacement’ for Dembélé, whose future seems to be away from Barcelona.